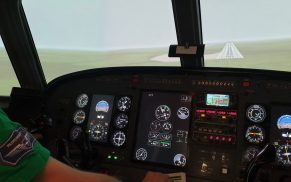 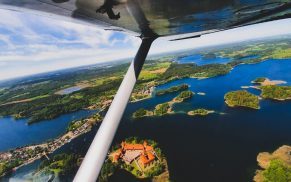 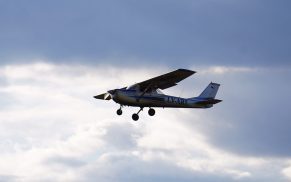 It snowed yesterday, today’s forecasts for next week again ❄️ What do you think is the joke of Fools day?

Our training organization prepares students for a PPL license ✈

From 21st of February 2022 we are gathering a new group for Private Pilot Licence PPL(A) course!👩‍✈️👨‍✈️

On the first and the second of November our office will be closed. 2021.11.01-02 is the All Saints' Day in Lithuania.
In case of any important, questions write us a letter to info@pilotumokykla.lt.

Well, this is it. Today the dream of my life came true. Or in other words, the goal is achieved. Today Transport Competence Agency granted me a Commercial Pilot Licence (CPL). This means I got the right to act as a pilot of an aircraft and to be paid for that. In other words, now I may become a professional pilot.

This is something I have dreamed of since 12 y.o., something I always wanted, but it looked unachievable. To be honest, lots of times I have buried this dream. Although I have a degree in aviation engineering and I work in aviation for many years, desire to fly airplanes and to participate in action (not just watch) did not disappear. Four years ago, under favorable circumstances I started learning to fly an airplane and soon acquired PPL (private pilot licence). Later on, step by step I passed 14 ATPL (airline transport pilot licence) theory exams, got my night rating, instrument rating, multi engine piston training, multi engine instrument rating and finally CPL training. This is called a Modular training, where everything is done step by step, on your own, on your free time.

Speaking about time and effort - it was quite demanding. 1.5 years of learning almost every day after work, during weekends and nights. Countless times I had to reject fun, pleasures and invitations and say "I can't, gotta learn". Also, holidays or trips had to be forgotten.

On the other hand, I have had lots of most wonderful trips around Lithuania (and outside) at the controls of an airplane, had a chance to see the beauty of lakes, rivers, woods, swamps, fields, villages, towns, cities, even the Baltic Sea from above.  I also had a chance to share the joy of flight with family, friends, acquaintances and even strangers by taking them onboard. In total I spent 211 hours in the air and had 665 takeoffs and landings. Flew 14 different airplanes, out of which - 7 different types.

This is just the end of one stage and the beginning of another one. But this stage was the most important. Even though the pandemic slightly adjusted the plans, delayed everything, I know that I did everything I could from my side. Now I got to find a job. But I celebrate! ...

As of 13 September, all contact services will be carried out only for persons who meet the criteria set by the National Certificate*.

* In addition to the National Certificate, other documents proving the confirmation of vaccination, recovery of COVID-19 disease, negative result of performed PCR test or rapid antigen test **, positive result of antibody test.

Day in the office ✈

Savo svetainėje naudojame slapukus, kad galėtume suteikti jums tinkamiausią patirtį prisimindami jūsų pageidavimus ir pakartotinius apsilankymus. Spustelėdami „Priimti viską“ sutinkate su VISŲ slapukų naudojimu.
Necessary Always Enabled
Necessary cookies are absolutely essential for the website to function properly. These cookies ensure basic functionalities and security features of the website, anonymously.
Functional
Functional cookies help to perform certain functionalities like sharing the content of the website on social media platforms, collect feedbacks, and other third-party features.
Performance
Performance cookies are used to understand and analyze the key performance indexes of the website which helps in delivering a better user experience for the visitors.
Analytics
Analytical cookies are used to understand how visitors interact with the website. These cookies help provide information on metrics the number of visitors, bounce rate, traffic source, etc.
Advertisement
Advertisement cookies are used to provide visitors with relevant ads and marketing campaigns. These cookies track visitors across websites and collect information to provide customized ads.
Others
Other uncategorized cookies are those that are being analyzed and have not been classified into a category as yet.
SAVE & ACCEPT